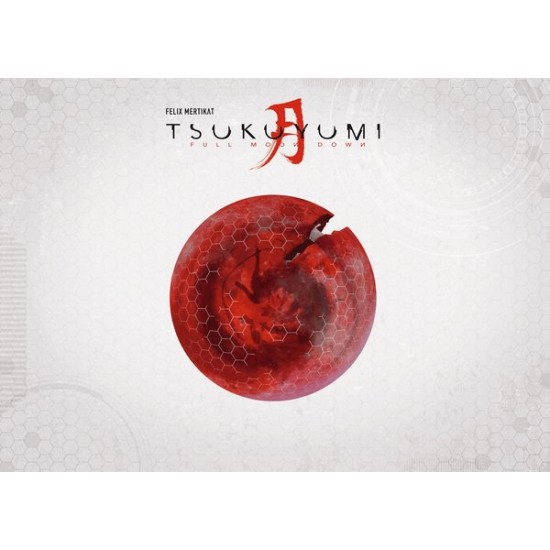 Preorder
Tsukuyumi: Full Moon Down
Based on 0 reviews. - Write a review
$95.99

Grey Fox Games
Enter your email address below and we will notify you as soon as the product is available again.
Email

Add to Cart
Buy Now Question
Add to Wish List Compare this Product
STORY
The future:
Slowly but steadily, the Moon has been approaching the Earth. It has touched the surface and ripped a deep rift across continents, mountain ranges and oceans. It has come to a halt in the now dried-out Pacific Ocean. Chaos and devastation wrecked the Earth and its inhabitants. That chaos grew greater when the Moon revealed itself to be a "kami" (a Japanese God of old) - the white dragon TSUKUYUMI. Exiled into the night sky eons ago, TSUKUYUMI has been roused by Japanese warriors, who tried to rid themselves of their godly creators. TSUKUYUMI'S time for revenge has finally come...

In the post-apocalyptic world, humankind is on the verge of extinction, whereas animal species mutated under the influence of TSUKUYUMI and grew bigger and stronger than ever. All those different factions are now fighting fiercely for survival, as well as for world domination.

TSUKUYUMI is a no-luck boardgame, that demands specific strategic skills of its players. Its particular appeal lies in the clash of multifarious, asymmetrical factions. At the beginning, each player picks one of the five factions. The factions bring their own respective abilities, units and strategies. Therefore the game changes depending on what factions meet on the battlefield.

Values and abilities of the factions still don’t guarantee victory. Numerous test matches have shown: it’s the players who find new combinations and the right moments to use specific faction features, who notice their fellow players’ weaknesses and use them to their own advantages. This way, they shape their faction and bring the creatures and their stories to life.

FACTIONS
THE NOMADS are the former soldiers who were stationed on the USS Nomad, an aircraft carrier that stranded in the wastelands. Armed, agile and patriotic as they are, the NOMADS try to claim the remains of the moon in the name of their (former) nation.

THE BOARLORDS are a nation of strong and intelligent boars, who enter the pacific region from the former Korean peninsula. They aim to replace the human race as dominant species - claiming more and more land by terraforming it into their rampart-like homes.

THE CYBERSAMURAI use satellites, supercomputers and artificial intelligence once developed in old Japan to control an army of drones, fighting bots and even an orbital laser system, threatening anyone who tries to plant their flag on the moon.

THE DARK SEED'S nest grew in the wastelands as roaches and other insects became bigger and more intelligent under TSUKUYUMI'S influence. Their swarm grows rapidly - and thus they fight relentlessly to overwhelm adversarial units and territories by their sheer number.

THE KAMPFGRUPPE 03 are the heirs to the Order of Marduk - and same as their spiritual ancestors in medieval times, dragonslayers Siegfried and Georg, they strive for a world unburdened by TSUKUYUMI'S existence.

GAMEPLAY
Each faction has its own units, its own strengths and special abilities - therefore requiring a very adjusted strategy to win.
After the gameboard is set up, every player chooses a faction respectively. The faction boards explain in detail all special abilities and how to use them. It also specifies the factions' start set-up.

According to the descending initiative order marked on the board, the players install their "Homezones", pick three start-areas and place their units.
Prior to the first round, they also choose a white action card - a combination of actions they can use before the beginning of each round.

Then, the players gather their resources according to what their areas offer. They may use these resources to bid on the blue, green and red action cards. Every phase is represented by six of those action cards marked from A to F. Every card displays a different combination of the actions that can be taken during its respective phase. The highest bid is awarded with the A-card, the next one with the B-card, and so on.

Each round consists of the following phases:
White Phase: Players use the white action card they chose to emphasize their strategy.
Blue Phase: Players can rise in the initiative order and/or draw an Impact Card.
Green Phase: New units are generated and resources collected.
Red Phase: Units are moved, adversarial areas and units may be attacked. Onis are placed, moved, and used for attacks.

GOAL
The player who gains the most Victory Points wins the game. Victory Points are earned by conquering and occupying areas, and by fulfilling goals and/or the faction's respective mission.

END
The game ends after the number of rounds determined by the players beforehand - usually 3-4 rounds.