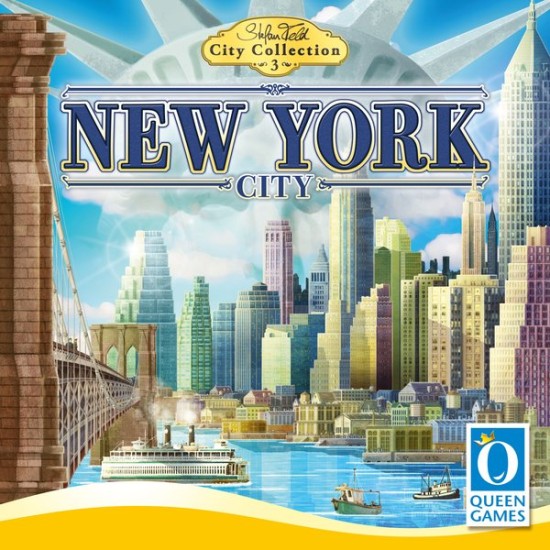 Preorder
New York City
Based on 0 reviews. - Write a review
$98.99
Enter your email address below and we will notify you as soon as the product is available again.
Email

A game of New York City is played over 5 game rounds. First, players deal out cards in sets of two cards equal to two times the number of players plus one additional. In turn order, players draft a pair of cards until they have 4 cards. Then, they draw 3 more cards from the deck.

Next comes the bidding round, where in turn order players will play cards to bid to determine the strength of their action, with the player who bids the highest getting a bonus. In order, the actions are:


Press: Advance on the Press track to determine player and tie-breaking order.
Money: Receive money to be used for special actions.
Characters: Take a character with a special ability or scoring up to the value of cards played.
Building plans: Take a number of skyscrapers from the general supply.
Prestige: Receive points equal to your bidding value. I addition, the first and second place bidder gets to increase the value of a borough.
Skyscrapers: Players place skyscrapers from their board into borough currently being visited by the mayor.


The game is played over six rounds (one for each borough). Each game, the value of boroughs is randomly assigned, and the player with the most skyscrapers in a a borough receives full value, and the next player receiving half, and so on. There is also a borough for building in every borough. Points are also awarded for certain characters, and the player with the most points is the winner.

Based on Rialto, a previously designed game by Stefan Feld.