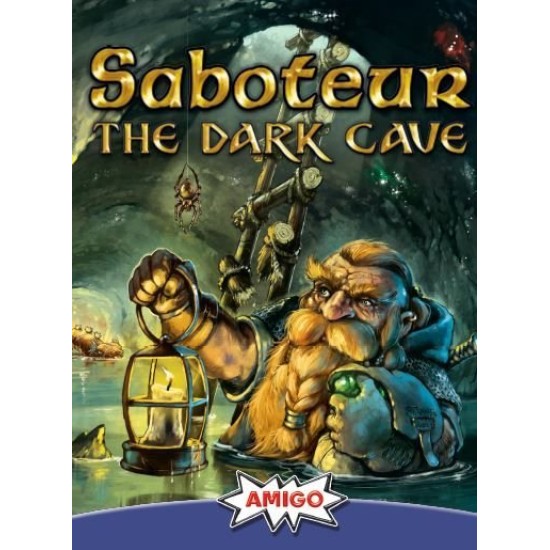 New
Saboteur: The Dark Cave
Based on 0 reviews. - Write a review
$18.99
Enter your email address below and we will notify you as soon as the product is available again.
Email

Add to Cart
Buy Now Question
Add to Wish List Compare this Product
After your dwarf clan found gold, you suddenly felt an earthquake and the mine is now collapsing. Time to escape! But the dark cave is full of dangers, such as spider webs, monsters, and of course the saboteurs who make your life miserable. Whose dwarf team can escape the cave with the most gold?

Saboteur: The Dark Cave is a standalone game that recreates the feel of Saboteur. At the start of the game, each player assigned to a clan, although possibly they will be a saboteur for the other clan. Starting from the mine card in the center of play, you take turns laying down tunnel cards to build outward from the mine toward the four corner cards, only one of which is the exit. In addition to building new tunnels, you'll play cards to give yourself equipment, place monsters in front of others, discover who's actually on your clan, and reveal the exit before trudging all the way there. As soon as you leave the mine, you reveal your true identity, with any gold you have going toward your clan's total. As soon as all members of a clan have left, the game ends, and whichever clan has the most gold wins.