Final Girl: Madness in the Dark 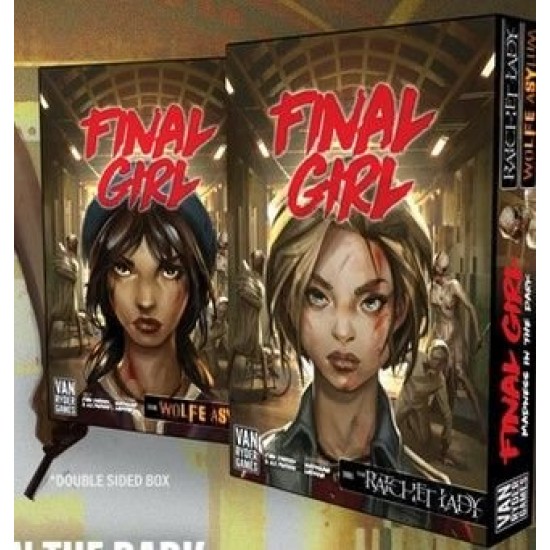 Preorder
Final Girl: Madness in the Dark
Based on 0 reviews. - Write a review
$21.99
Enter your email address below and we will notify you as soon as the product is available again.
Email

No matter where you go in Wolfe Asylum, noises and voices always seem to echo. It is particularly frightening when one of the residents cackles or a group of them cheer during a game of them cheer during a game of bingo in the common room. Those noises are nothing, however, compared to the blood-curdling shrieks of terror generated by the evil brand of medical "care" the Rachet Lady is giving the asylum's residents and staff. What do you do when the maniacs come?

The Ratchet Lady is in a mood. She’s performing her own brand of therapy on the victims, turning them into bloodthirsty maniacs. You’ll have to decide if you want to try to calm them down or kill them before they can kill you. But the only way to really stop them will be to put down the Ratchet Lady herself.

Wolfe Asylum seems harmless and like a typical mental institution to outsiders. Inside lies something very different. There’s medicine and other drugs inside that can, shall we say, amplify your abilities. But at what cost? When the choice is death or a potential side effect, it really isn’t a choice at all. Down the hatch!

Each Feature Film Box is double-sided, with amazingly illustrated covers on the front AND back. Not only that, but the magnetically attached box covers are removable, with the reverse of each functioning as the Killer and Location boards respectively.